The Chickasha Chamber of Commerce’s Successful Women’s Breakfast Series is back on September 16th in the USAO Ballroom. The breakfast will start at 7:30 AM featuring Dr. Gayla Lutts, Superintendent of the Canadian Valley Technology Center.
The cost for this event is $20 for Chamber members and $25 for potential members. RSVP by contacting The Chickasha Chamber at (405) 224-0787 or emailing office@chickashachamber.com.
Dr. Gayla Lutts is the superintendent of Canadian Valley Technology Center. Her educational career began as a Family and Consumer Sciences teacher at Del City High School in 1991. While there, she was named the Outstanding First-Year Teacher of the Year for the district, as well as nationally recognized as the Sallie Mae First-Year Teacher. Dr. Lutts moved to the Yukon Public School district in 1997 to take a position as a family and consumer sciences teacher.
In 1999, Dr. Lutts began her tenure at Canadian Valley Technology Center as the hospitality and retail services instructor for the El Reno Campus. She was named 2002-2003 Teacher of the Year. Later she served as an academic center instructor before she joined CV Tech’s administration in 2009 after completing her Master degree. Dr. Lutts was honored as the 2010-2011 Canadian Valley Professional of the Year.
On the eve of becoming the Director for CV Tech’s El Reno Campus in 2013, a tornado destroyed the school. Thus, Dr. Lutts took on not only the duties of a Campus Director, but also those of a project manager as she oversaw the reconstruction of the school. Dr. Lutts was named the Deputy Superintendent of Canadian Valley Technology Center in January 2016. In July 2018, she completed her doctoral degree in Educational Leadership and officially became the first female Superintendent of Canadian Valley in August.
Dr. Lutts serves on the Yukon Chamber Board, Integris Canadian Valley Hospital Board, and as a trustee with the National Technical Honor Society as President-Elect. She was named as one of the 2019 Journal Record, Woman of the Year Award recipients - 50 Making a Difference and this year was honored as one of The Journal Record’s Power 2021 Education List honorees.
Dr. Lutts has been married to her husband, Mike, for 33 years, and together they have three children. Their son, Braden, is a driver for UPS; daughter, Rylee, just completed her first year of teaching math at Mustang Public Schools; and son, Bryce, is pursuing his undergraduate degree in education.
Additional dates for the 2021 Successful Women Breakfast Series are December 9th. Thank you to First National Bank and Trust and USAO Foundation for sponsoring this event. 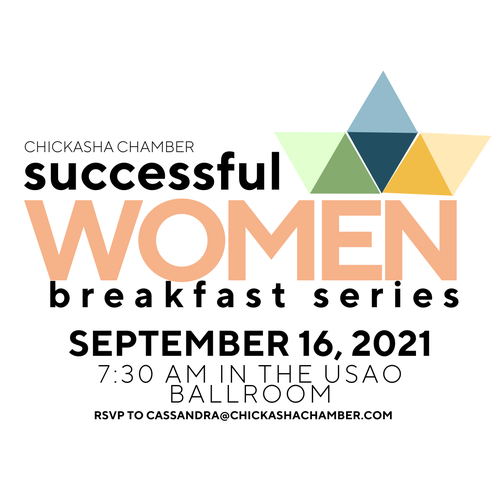 $20 for Chamber Members and $25 for Potential Members

The American Dream is alive in Chickasha.

Relax in our beautiful hometown.

Children can have a world-class education in Chickasha.